9 May 2019 — Cosmin CONCEATU
The Latvian Motor Insurers Bureau (LTAB) reported that the number of road traffic accidents (RTA) in Latvia involving uninsured vehicles decreased in 2018, compared to the previous year. In 2017, about 1.24% of total RTA were caused by uninsured vehicles, while last year 1.11% of RTA were caused by vehicles without a valid MTPL policy (- 0.13 pp).

LTAB estimates that in 2018, between 1.0% and 1.5% of the national vehicle fleet was uninsured against third party liability. In absolute values, LTAB reported 8,886 vehicles without MTPL contracts, the y-o-y change reflected in a small decrease of 0.61%.

Spring was the season when state police caught the most uninsured drivers, particularly March (858 uninsured vehicles) and April (855), while December saw the lowest number of cases with missing MTPL coverage (527).

The region with the highest rate of uninsured vehicles was Latgale (1.66%) while the lowest rate was seen in the Riga region (0.87%). Latgale, however, saw the greatest improvement y-o-y compared to any other Latvian regions. The figures for each region can be found below. 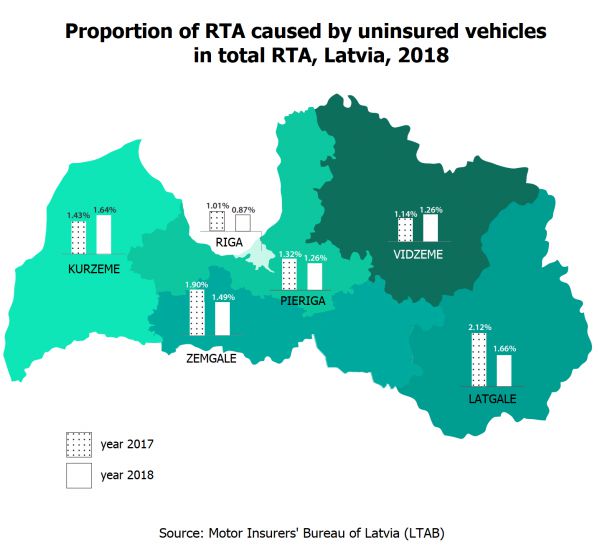 In Latvia, when an RTA is directly caused by an uninsured vehicle, the resulting damage and injuries to victims will be covered by the Guarantee Fund. Later on, the RTA perpetrator will be required to repay the compensations offered to victims through the Fund. Increasing compensation limits seen in previous years (especially for bodily injuries) in Latvia and other European countries can put enormous pressure on a driver's personal finances, if they cause an accident on a public road without an MTPL contract.

Latvian drivers who are caught without a valid MTPL are penalized with 2 traffic offense points and an up to EUR 120 ticket; the police crews can also use radar photos to verify MTPL validity and send the tickets directly to the drivers' homes if no available policy is found.

MTPL insurance in Latvia is known to be part of OCTA system. The system was introduced in 1997. In 2018, there were 9 insurance companies with licenses to conduct MTPL activity.

LATVIA: Smoke detectors and fire extinguishers mandatory for every home

LATVIA: the market is growing yet risk insurance still accounts for only 1.3% of GDP

LATVIA: the Board of the LAA re-elected