19 December 2019 — Cosmin CONCEATU
Global commercial insurance prices increased by 7.8% year-over-year at the end of the third quarter of 2019, according to Marsh's quarterly Global Insurance Market Index.

The third quarter of 2019 growth(+7.8%) was the largest y-o-y increase in the Marsh Global Insurance Market Index since its inception in 2012, keeping the upward trend which started at the end of 4Q2017. At global level, on average, pricing for property risks increased by 10.2%, financial and professional lines rose by nearly 14.2%, while casualty increased by 0.8%.

"Composite pricing in the third quarter increased in all geographic regions for the fourth consecutive quarter, largely driven by rates in directors and officers (D&O) coverage and property," Marsh mentioned in the report. Per each region, the composite insurance pricing change at 3Q2019 was as follows: 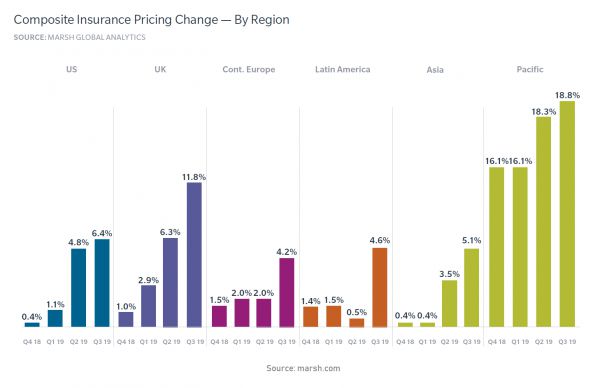 Pacific index recorded the highest increase y-o-y in Q3 (+18.8%). Marsh explained that Pacific composite pricing "was driven by increases in D&O rates, as well as increases in property rates". Continental Europe recorded the lowest increase in commercial insurance prices (+4.2%) compared to all the other areas included by Marsh.
Continental Europe (CE)

"Insurance pricing in the third quarter of 2019 in Continental Europe (CE) increased by more than 4%, driven primarily by property insurance," Marsh mentioned.

Property insurance pricing in CE rose 7.5%, the fourth consecutive quarterly increase and the longest trend of pricing increases in five years. Property line was more prone to volatile evolutions, quarterly changes ranging between [-9.1% ; +7.5%] from 3Q2015 to 3Q2019. Marsh noted the following trends on this line:

Casualty insurance pricing increased 1.0% in the third quarter of 2019, which was only the third increase observed in the last six years. Compared to Property or FinPro, Casualty line prices increased only in 1Q2016 and 3Q2019. Marsh explained:

RUSSIA: INNOINS-2020 Insurance Innovations Forum to be held on June 30

RUSSIA: in June 2020, the number of paid claims of SBERBANK Life insurance increased by 30% y-o-y